Open forests of tall pines, with a sparse but diverse understory of shrubs and small trees, cling to the rounded, white limestone peaks of the coastal mountains of southern Anatolia. The pines wear a pristine, lime-green cloak of leaves. Previous generations of needles, brown and brittle as butterscotch, absorb my considerable weight, as I toil up the slope. It’s like walking over eiderdown.

The resinous scent of decomposing needles drifts like a limpid blanket, draped over the mountainside, mingling with a subtle, sweeter fragrance wafting up from thousands of flowering Cyclamen. These are Cyclamen graecum or, if we want to be bang up to date with our nomenclature, C. maritimum*, which flowers as soon as the plant emerges from its brief summer dormancy, well before the autumn rains. In some cases the tips of the leaves are just poking through the pine-needle litter, still curled up tight, like tiny, saw-toothed shovels. Other plants, further advanced, have already unfurled their leaves, dark green and mottled with white, silver, pale green and fawn-coloured veins and blotches. Every plant has a unique leaf pattern – they are as distinct as human fingerprints.

Cyclamen flowers are marvellous works of evolutionary engineering. The flower stalk reverses direction just before it joins the base of the flower, like the head of a shepherd’s crook. Each of the five petals then reflexes back on itself about halfway from base to tip. A narrow, cylindrical tube is formed where the reflexed petals meet, enclosing the plant’s sex organs. In some species, including C. maritimum, a little fold of petal creates a structure called an auricle – Greek for ‘resembling an ear’ – around the mouth of the tube. The distal half of each petal twists on its long axis, so that the flower, dangling at the end of its slender black stem – almost invisible from above – looks like a miniature propeller and the impression created by a large colony is of an entire air force of propellers, held silently aloft by some unseen force, a few centimetres above the forest floor. 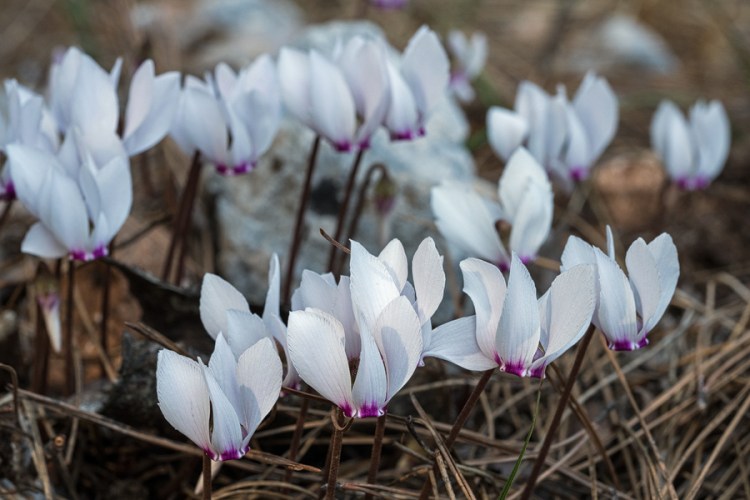 The diversity within Cyclamen species is legendary, and I’ve been lucky enough to see plenty of it on my travels, but the variation in the populations of C. maritimum in the hills above Kemer is off-the-charts. The flowers on individual plants vary from short and squat, to tall and elegant; their colour from pure white, through the pink of a queen conch’s throat, to mauve and deep magenta. The auricles, always present, are more-or-less stained purple. The purple stain bleeds variably into the veins on the distal half of the petals. The leaves, infinitely variable in surface patterning, also vary in surface texture from almost glabrous (jargon for hairless) to velvety, like the pile on a very fine carpet.

Freed by recent life-changing decisions from the tyranny of seed-collecting, I was able to spend hours on my hands-and-knees, crawling around and photographing some of the finest specimens. I could have spent weeks doing nothing but taking pictures of Cyclamen, but I had a snowdrop to find.

Some snowdrops – Galanthus nivalis, for example – occur over huge, continent-spanning ranges. Others are confined to a few valleys in geographically and ecologically narrow niches. One of these is Galanthus peshmenii, an autumn-flowering species, which has been known for a long time but only recently recognised as a distinct species. It grows on north-facing slopes, in pockets of humus on limestone boulders and in screes, near Kemer in Anatolia and on the Greek island of Kastellorizo. In cultivation in the UK, G. peshmenii starts to flower in early October but I had no idea when it would do so in the wild.

There was a narrow window in my career trajectory, between 17 and 21 October and into this slot I inserted the first trip of my snowdropathon. I expected to be too early, and so it proved. Reaching the elevation at which Galanthus peshmenii occurs – about 600m – I found a few, precocious flowers emerging but most of the population still below ground. There had evidently been no rain here yet this autumn and I suspected that the dormant plants were awaiting the first rainfalls, and possibly cooler nights, before coming into flower.

Being thwarted by nature goes with the plant hunting territory but, for an amateur botanist, there is always something to see and mysteries to ponder.

Why, for instance, does Cyclamen maritimum stop dead at an elevation of 150m in Göynük Canyon, whereas, in the nearby hills above Kemer, it is still abundant at 700m, where it overlaps with its spring-flowering congener, C. alpinum? Why does Galanthus peshmenii, which genetic studies reveal is closely related to G. elwesii, much more closely resemble G. reginae-olgae? Why do plants, originally collected above Kemer, flower so much earlier in cultivation in the UK than they do in the wild? These and other questions tumbled through my brain, as I hauled my fat ass up the steep track leading into the mountains.

One of my favourite shrubs, Cotinus coggyria, Smoke Bush, assuming its autumnal guise of yellows, oranges and reds, was prominent in the understory. The Judas Tree, Cercis siliquastrum, was much rarer, occasionally festooned with pea-like seed pods, betraying its membership of the Fabaceae family. A deliciously scented Daphne species was flowering, from sea level up to 700m. Thorny Smilax aspera, pregnant with bunches of pillar-box red berries, twined through the shrubs. I came across one tiny patch of a Colchicum, a taxonomically impenetrable genus. My best guess is that this is C. balansae, but – doh – I forgot to check the colour of its cataphylls, so I can’t be sure.

Hauling 102kg of desk-bound, stress-enfeebled flesh (plus several kilograms of new camera equipment) up 700m of Turkish mountain is hard work and, when I retuned to my car, I was ravenous. Out in the sticks, I didn’t hold out much hope of finding anything better than a greasy kebab joint, but I pulled into the first roadside restaurant I came across and parked the hire car under a large plane tree, majestic in its autumn garb. Directed by the watchman down a timber boardwalk, I emerged beside a gin-clear river to a scene out of Lord of the Rings. The air was fuggy with smoke and a delicious scent of grilling meat. A band was playing folk music of an excruciatingly awful, pig-sticking quality but happy people were dancing on a little stage. Waiters pushed past me, bearing platters of meats, meze and pillow-sized loaves of oven-blackened, unleavened bread.

I seemed to have stumbled into a private wedding party, or something of the sort, and my heart sank for, having glimpsed culinary paradise, I wanted to stay and eat. I needn’t have worried. The proprietor materialised at my elbow and guided me to an empty table, no doubt recognising a glutton when he saw one.

Modestly, I requested a simple plate of roast lamb and a salad but what arrived dictated an instant re-evaluation of my ambitious plans for the rest of the day. First there came about a dozen little dishes of delicious things. Aubergines, grilled over charcoal, their silken flesh infused with smoke from the fire; roasted peppers, chopped up with tomatoes; yoghurt with herbs and mashed garlic; crumbly goat’s cheese, with a sour, salty tang; a large bowl of finely chopped cucumber, tomato and raw onion; a plate of parsley and another of rocket; a handful of innocuous-looking but deadly chillies, which almost provoked an international incident, when I ate one whole in a virtuoso display of hubris; two entire loaves of bread; a clay pot full of mushrooms, still bubbling from the fire and dripping with melted cheese; several lemons and a totally superfluous pat of butter, itself containing more calories than the government-approved daily limit for a pasha. And this was my starter. Which I hadn’t actually ordered. 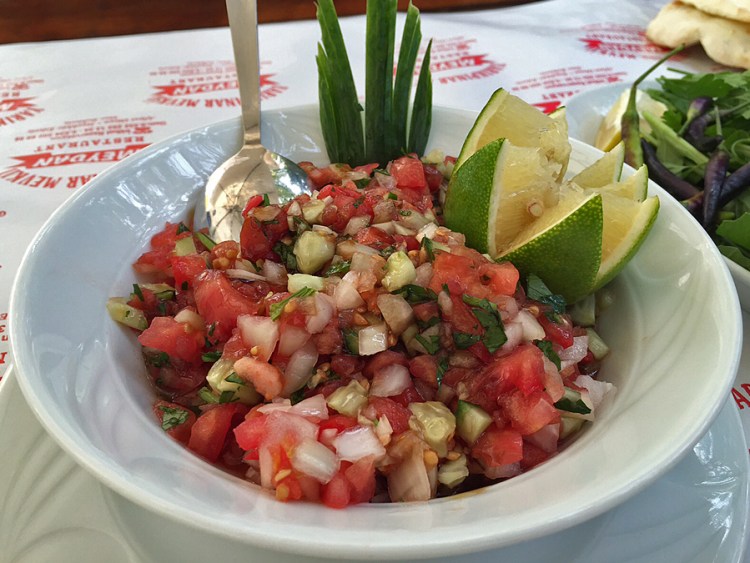 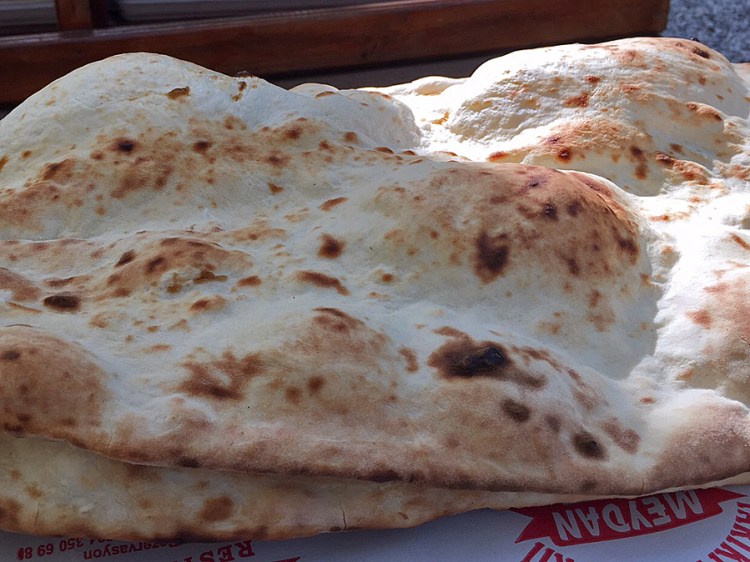 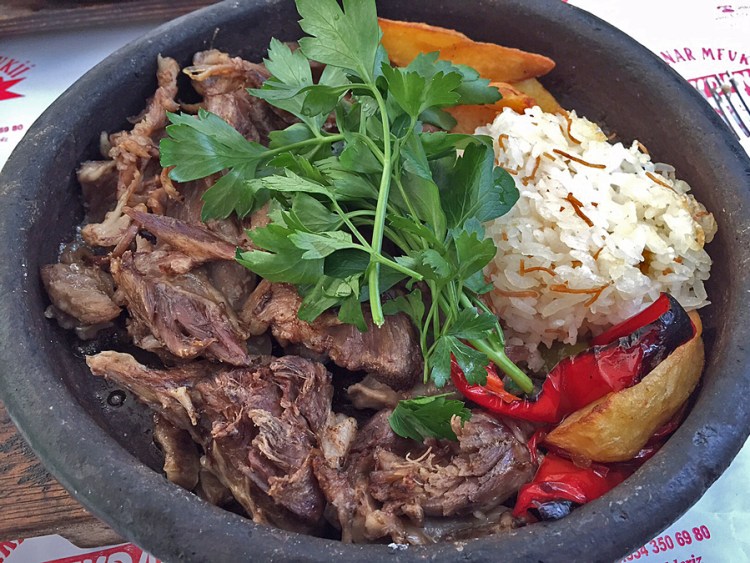 By the time the lamb arrived, I was already sated. The dish contained morsels torn from a shoulder, slowly cooked until the fat had melted away and the stringy flesh was as tender as a ripe peach. I squeezed half a lemon over the steaming meat and ate it slowly, with mouthfuls of bread and parsley and occasional gulps of beer. The stream burbled beside me. A school of fat trout gathered to squabble over crumbs tossed to them by the nearby diners. The bill, when it came, was as eye-watering as the chillies, but I had no regrets.

After three days along these lines, I did something very out of character and decided to be a tourist for a day. I spent a few hours wandering around Kaleiçi, Antalya’s old town, which surrounds a Roman harbour, from which schooners, fancifully dressed up as pirate ships, take holidaymakers on jaunts along the coast. I soon tired of the endless bazaars, lined with identical shops, selling identical souvenirs and retreated to a café, where I could watch the world go by and drink coffee and mouth-puckeringly tart pomegranate juice, squeezed before my eyes. Later I found a restaurant on a terrace over the harbour and drank crisp white wine with my lunch of grilled bream. Storm clouds were gathering over Tahtali Dag and soon the rain started to fall in sheets, lightning cracking the sky.

I imagined the parched forests that I had been botanising a day earlier, sucking up the first heavy, life-bringing rains of autumn. The snowdrops are awakening.

*Technical note: some botanists have long treated the populations of Cyclamen graecum in SW Anatolia as a distinct subspecies, anatolicum. Recent molecular studies suggest that a treatment more consistent with the nomenclature of the rest of the genus would be to treat them as a distinct species. The name with priority is C. maritimum. Thanks to JL for pointing this out to me. Anyone interested can read the paper here: http://centaur.reading.ac.uk/38956/