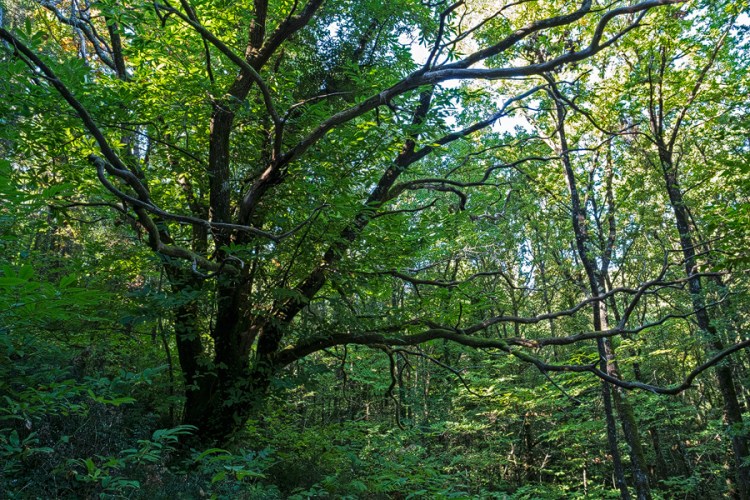 The sun is at its zenith and shafts of golden light slant through the forest from a high angle, turning the canopy into a filigree of green and gold, like the intricate pattern on the tiles of a mosque. An old sweet chestnut looms overhead, half its limbs dead or dying. From its scarred, cankered trunk, claw-like branches radiate outwards for a dozen metres. Overhead, the wavy margins of the old tree’s remaining leaves are silhouetted against a blue sky, glimpsed through the almost closed canopy. The forest floor is cast in gloom – the orb of the sun, just peeping over a ridge to the south, isn’t high enough in the sky to light it directly. A luxuriant carpet of ivy, springy underfoot, cloaks the ground in a tapestry of greens of a dozen different, dark hues. The air is humid and warm, despite the deep shade, and smells richly of decomposing leaves and mushrooms. Knee-deep, spreading colonies of Butcher’s Broom (Ruscus aculeatus) hinder one’s progress across the slope. Its evergreen stems bear razor-sharp, diamond-shaped structures that resemble leaves but are in fact cladodes, botanical jargon for modified stems. Patches of purple and shocking pink punctuate the funereal shroud of ivy. Cyclamen hederifolium is flowering and, looking carefully, one can pick out its leaves, almost perfectly camouflaged amongst the ivy – Hedera – from which it takes its name. When not in flower it would be easy to miss. Less common than the Cyclamen, but frequent enough that each plant is, at most, a few metres apart, the startlingly white flowers of snowdrops hang like lanterns from the tops of their tall, naked stems, the leaves still mostly hidden beneath the ivy. Though I get down on my hands and knees and inhale deeply, I cannot detect any scent from the snowdrops and precious little on the Cyclamen. But then, I don’t trust my feeble human nose and, if I were a bee, no doubt the woodland would seem a rich and subtle playground of fragrances as varied as the colours we humans see. 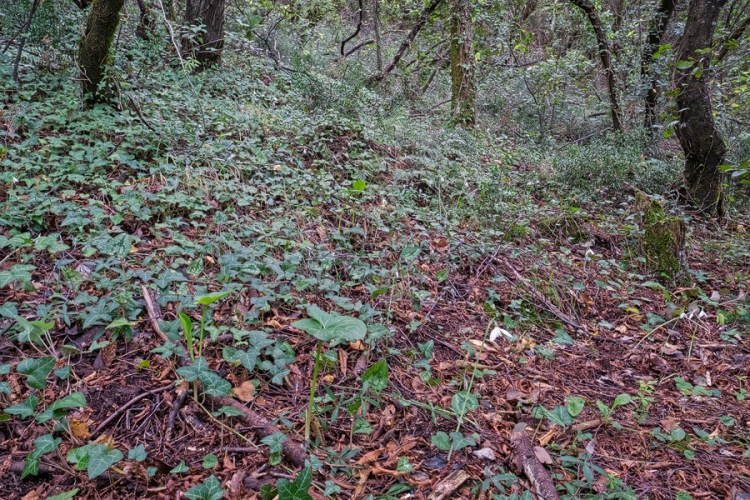 This human is in his element, moving purposefully through the undergrowth in a semi-trance going, not unlike a bee, from one flower to the next, stooping to admire each one, sometimes turning the bloom carefully, to examine its interior, like a voyeur in a gigantic botanical peep-show. To be perfectly honest, I doubt whether anything Soho has to offer is as varied as this woodland on the Greek island of Corfu and, though I spent much of my time there on my knees, sweating profusely and panting, it’s certainly less sordid.

Extreme snowdropping, as one commentator delightfully described my current activities, is an arduous activity and regular refuelling stops are prescribed. It was long past lunchtime but, on a whim, I took a road that lead to a restaurant promising fresh fish, on the north coast. It was closed. This, it turned out, was a happy accident, for I ended up instead at Taverna Zephyros, lunching amongst jovial Greek families, on stifado and home-made red wine. Stifado is a dish of beef brisket, cooked for about a week (it seems) with small onions, until the beef is barely coherent and the sauce is thick, glossy and as concentrated as Marmite. Replete, I asked for the bill but the owner tentatively suggested I try a pudding. ‘My mother makes it once a week, on a Sunday,’ he argued persuasively. ‘It’s called galaktoboureko,’ he added (I made him write it down), settling the matter. It was an exquisite confection of semolina, filo pastry and honey, and delicious.

Late afternoon found me driving across a cratered, jagged landscape of karst limestone, high on the western flank of Corfu’s highest peak, Pantokrator, the grey-white limestone turning flesh pink and fiery orange, as the sun set in a cloudless sky. A man on a motorbike, a shotgun slung over his shoulder, roared past me, as I negotiated the chicanes and hairpins. I saw him again at the summit and we watched the sunset silently, standing a few metres apart, me reflecting wistfully that I have one day fewer than I had yesterday left to live, he waiting in vain – this time – to blow a passing raptor out of the sky.

The two-room cottage I had rented for the week was perched on a hillside far above Kassiopi but it lay at the very bottom of a well of golden silence. At night, the silence was so thick it was almost tangible. When a dog barked, far away, or a Little Owl called, the intrusion was shocking. On my last night in Corfu I built a huge charcoal fire and grilled kofta kebabs, which I ate with olives the size of quails’ eggs and pickled peppers, straight from the jar (no-one was watching). A lambent moon rose over Albania, throwing a silver causeway a mile wide across the narrow, shimmering strait between Corfu and the mainland. According to his brother Gerald’s biographer, Douglas Botting, Lawrence and Nancy Durrell, who lived at Kalami, not far from my cottage, would occasionally row across to Albania on moonlit nights, for a picnic on a deserted beach. I’d found this anecdote implausible when I read it but now, looking at a brightly lit sea, shot like silk with a thousand shades and textures of blue, I could imagine doing the same.

Gerald Durrell’s Corfu books had an enormous influence on me as a child. The enchanted, fun and school-free childhood he described contained all the ingredients that were missing from my own existence and I lived vicariously, reading and re-reading his books until they literally fell apart. I have always resisted visiting Corfu, knowing that it would certainly fail to match up to the fairy-tale illusion painted by my childhood apotheosis. But, although I’m sure that Durrell himself would despair at the way in which mass tourism has altered the island he adored, enough magic remains that I fell in love with it. Old Plop, the terrapin, may no longer disport himself in the marshes near Pérama, as Botting eloquently puts it, but snowdrops still bloom in the ancient olive groves.